On our IFVP conference planning site, Nancy Margulies noted “Also, we in the Bay Area are exploring what the Tipping Point for our profession might be—how it might grow rapidly, how it might contribute to substantial large scale change, etc.”

Just maybe I’ve inadvertently pushed on that edge a little by using maps to aid in story-telling. In the Retreats and Videos post below I described a session with ECU’s Division of Research and Graduate Studies. To begin planning the event, I asked the

Associate Vice-Chancellor, Paul Gemperline, to tell me what was going on. As he talked I just drew on the wall with a big fat piece of lead. We eventually decided to start the event with him telling “Paul’s Story” about the Division and its current situation. He used a much cleaned up version of the map in his presentation, and to begin the Focused Conversation about it we had each participant come up and add to that map.

In the Visual Process Meets Mortality post immediately below, I interviewed the 15 participants ahead of time with a protocol that borrowed from Appreciative Inquiry. I put all of their responses on the

11-foot long graphic, and then added illustrations of things that struck me. In the back of my mind was an instance described in the book Appreciative Inquiry and Organizational Transformation
in which the interviewers wrote parables. In the session here, we set aside time for everyone to stand and study the graphic. Next, I talked about the images very briefly and we then repeated the Focused Conversation process described above.

So what does this have to do with ’s note? Both of these graphic records turned into stories that were returned to the groups for an afternoon’s work. As stories they took on

another form, and then each dealt with them in their own way. I’m thinking there are emotional aspects as described below in SoL in Tucson: we react when we see what we’ve said written down by someone else; we react to color; some react to visuals, others to words and stories. Some might suggest that the space between emotion and reason is where presence exists. Can we develop these practices to aid large scale change? Paul Gemperline seems to think so. 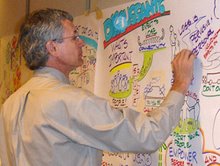 This site probes visual imagery as an essential tool for change and transformation. It is about process design and our needs as individuals within a collective. It is about the enormous but often untapped potential that exists when people come together in groups. 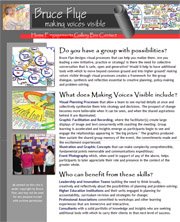